Aomori me away green pastures to town and resutorannkawayoguriinnroddzi.
Lunch, dinner, barbecue, banquet, shop, café, park golf, handmade experience, accommodation, camping, excursions, animals and walks can be done on the site of about 50ha. There are some changes in business hours.
Youth hostels are closed. From Monday, April 11 to Monday (the following day if monday is a national holiday), the shop is closed. Please refrain from entering on shop holidays. 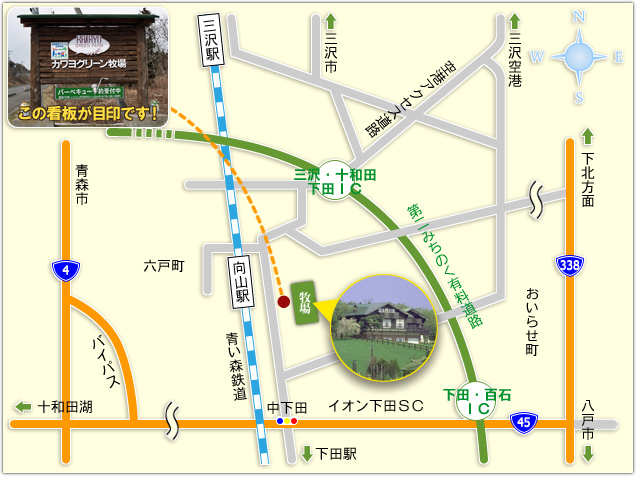 10 minutes walk from the blue train, mukaiyama station."
Than the Shinkansen [Hachinohe station] at one third of transit station, mukaiyama station."the old 10-minute walk.
Station is an unmanned station. YH Guide version comes up the stairs from the platform. In area convenience stores and shops.

Approximately 25 minutes by car from Misawa airport.
Previously had a bus MISAWA station from the airport, but not currently runs only buses to Hachinohe station and abolition.

If you use the highway
Hachinohe Expressway Hachinohe JCT no yorimichi spiders in the second in toll road, via Route 45 from Shimoda momoishi IC is approximately 10 minutes.

By car from Hachinohe area
Route 45, towada city, turn right at the signal in Shimoda. Y-intersection: proceed to the left and to the right entrance.


By car from Aomori area
Via Michinoku toll roads and highway 4, Highway 45, go in the direction of Hachinohe, turn left at the signal in Shimoda. Y-intersection: proceed to the left and to the right entrance. 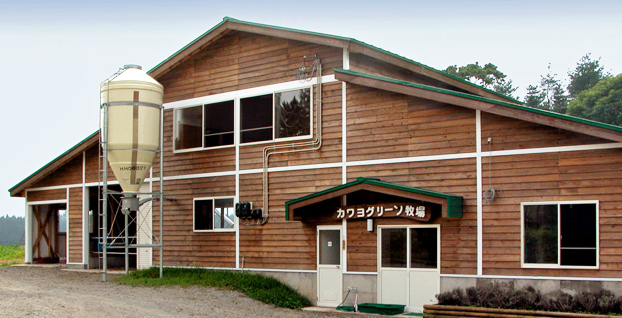 About the company, please see below.

This page has been translated automatically. Please note that it may differ from the original content. 青森県上北郡おいらせ町向山5-3331
» Access
A カワヨグリーン牧場
(Shops, golf, experiences, accommodation and other)

• Restaurant hours
for the time being
Lunch
11:30～14:00ラストオーダー
Dinner
17:00~19:30ラストオーダー
Restaurant closed
Monday, 1st and 3rd Tuesday
(If it is a public holiday, it is closed the next day.
We will inform you of the top page for detailed regular holidays.
Business hours may be changed depending on the new corona infection situation.
Thank you for your understanding.

▼ shop opening hours
for the time being
9：00～16：30
Shop closed Mondays (the following day if Monday is a national holiday)
Please refrain from entering on shop holidays.
Campsite From April 6
Park Golf From April 12
Youth hostels closed ♦ can see from mobile and Smartphone's
From hereSky email

♦ can see from your PC.
Read the QR code, please send the blank email. * Who do not receive registration confirmation emailこちら
* Registration is from a Smartphone or mobile phone please.

This page has been translated automatically. Please note that it may differ from the original content.